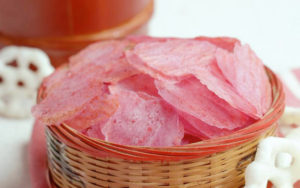 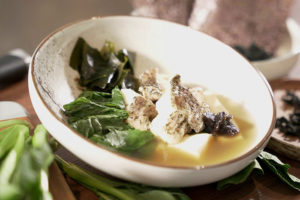 Let it braise for 10 minutes until fairly tender and serve.

The Gut Microbiome and the Diet

The majority of the bacteria that is found in the gastrointestinal tract (GIT) is found in the large intestines. The high acid environment in the stomach prevents the growth of bacteria. The first part of the small intestine receives the acidic mixture of food from the stomach, known as chyme, and hence does not have a lot of bacteria.

Until recently, little was known about the role of the gut bacteria. Research has now shown the importance of these bacteria in promoting the health of the body in which they reside. There is a great diversity of gut bacteria present, but the bifidobacteria and lactobacillus are the most commonly known beneficial types of gut bacteria. Larger numbers of good bacteria are responsible for crowding out bad bacteria (those that can cause infections) as well as yeast. Reduction in the diversity of gut bacteria has been associated with increased risk of diseases associated with inflammation including obesity, diabetes, heart disease, inflammatory bowel disease, polycystic ovarian disease, endometriosis and cancer.

These bacteria ferment plant material such as resistant starch, cellulose and hemicellulose and plant polyphenols found in tea and cocoa. This fermentation produces gas, which is the reason why foods high in fibre often are known to produce bloating and flatulence, but also important fatty acids which have a role in supporting the immune system, reducing inflammation and boosting the immunity to reduce gastrointestinal, respiratory and urinary tract infections. These fatty acids also produce appropriate peristalsis of the intestines and promote the health of the colonic lining, reducing intestinal permeability (also known as leaky gut) and reducing the likelihood of polyps and colon cancer.

Fatty acids also result in a more favourable environment for the absorption of calcium, medicinal herbs and plant oestrogens, known as phytoestrogens, have important role in the prevention of breast cancer in women. Polyamines are also a by-product of these bacteria and these may have anti-bacterial and anti-fungal activity. Bacterial activity in the intestines are also responsible for production of vitamin B and K in the intestines, increasing the digestibility of food such as proteins. Some bacteria may even produce opioid-like substances known as endocannabinoids which can reduce the hypersensitivity of the GIT and may help in conditions such as irritable bowel disease, as well as be responsible for reducing the appetite and promoting satiety.

These bacteria hence need to be fed. Beneficial life bacteria can be introduced into the GIT through the consumption of fermented foods such as yoghurt, kefir, kimchi, achar and natto. These beneficial bacteria can perform the actions of indigenous bacteria, but often do not hang around for a long time. Many of these bacteria may also not survive the acidic environment of the stomach of the bile acids in the small intestine and hence may not be available to do their good work in the distal ileum and the large intestine. But fermented foods have been found to have less anti-nutrient activity such as from phytates which reduce the absorption of vital minerals such as iron, zinc and calcium. Fermentation also appears to reduce the activity of pesticides often found in plant foods and so fermented foods should still form an important part of our diet.

Prebiotics are undigestible substances that support the growth of beneficial gut bacteria such as bifidobacteria and lactobacillus bacteria. These can be found in foods that are high in resistant starch, the cell walls of plants (hence whole foods rather than processed foods are important), pectin and gums and include brown rice, oat bran, carrots and sweet potatoes.